< Back to All Volumes 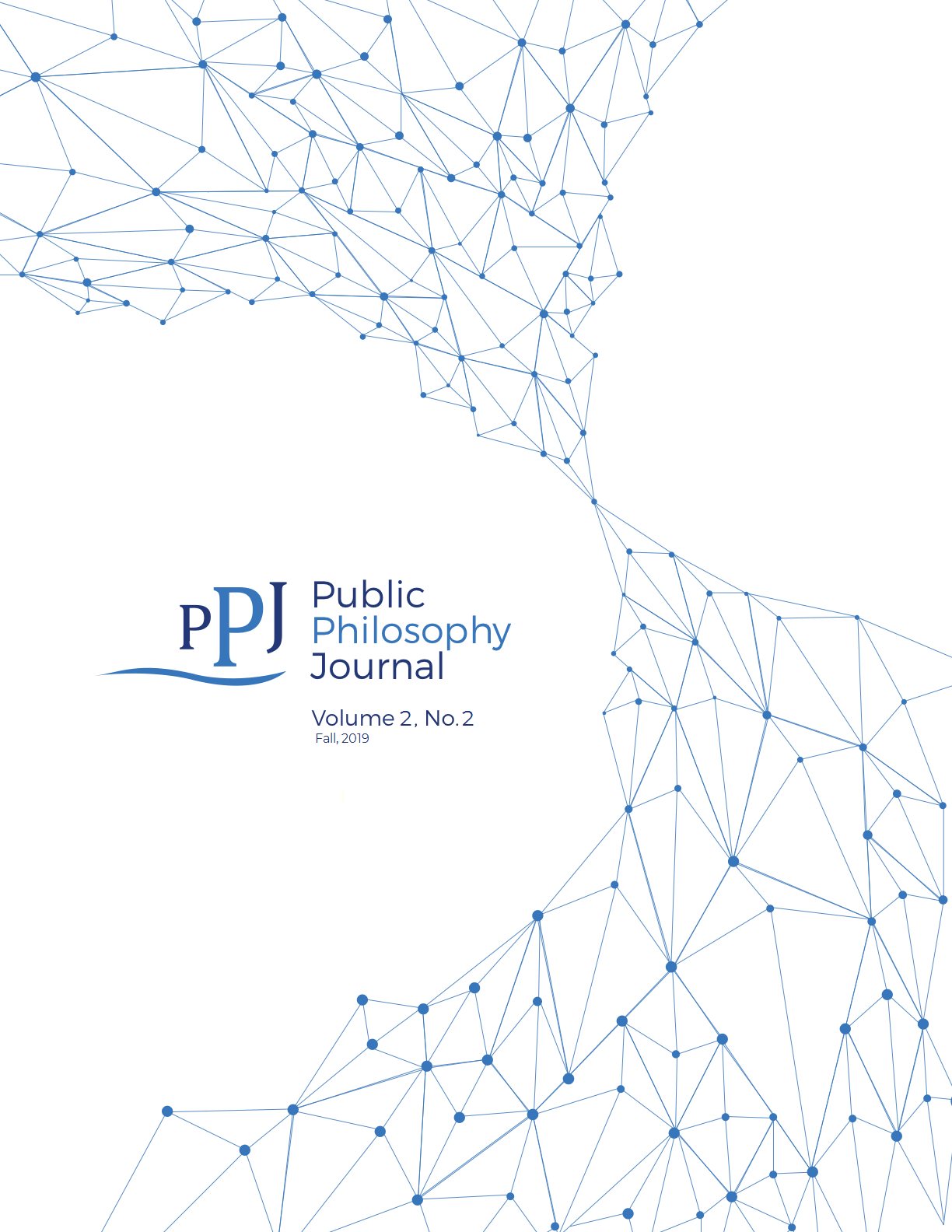 We are pleased to share volume 2, issue 2, of the Public Philosophy Journal. First presented at the Philosophical Engagements with Trauma conference at the University of North Carolina: Asheville, these essays have been collected and edited by Melissa Burchard, Courtney Miller, and Hannah Bacon.

The Need for Philosophy in Times of Trauma

For many years, trauma has been seen as a frequent “elephant-in-the-room,” one of those features of life that we do not wish to strengthen by acknowledging its presence. Many people try to shun that elephant, averting their eyes and covering their ears, because the pain of it is not what anyone wants, and the effort of responding to it seems more than what many are willing to bear. Unfortunately, ignoring trauma does not make it go away. On the contrary, ignoring trauma tends to allow it to become more entrenched, which is not what we want. As difficult as it may be, our best response to trauma is to recognize it. This may mean different things, depending on our skills, abilities, strengths, and relationships to the trauma. As individual persons, it may mean simply offering a compassionate response. As philosophers, it may mean engaging with others in ongoing research and scholarly efforts to better understand trauma and how it affects human experiences.

Haisla writer Eden Robinson’s acclaimed novel, Monkey Beach, demonstrates the lived-effects and consequences of colonial trauma. This ongoing trauma ripples throughout the community of Kitamaat Village, creating a cycle by which it repeats and magnifies. By contextualizing cycles of trauma within epistemic injustice and temporal sovereignty, this article elucidates both the harms inflicted upon the Haisla people by colonization and the modes of resistance developed by Robinson and her characters. I argue that Robinson uses the “double-landscape” of the spirit world to illustrate the tension between Indigenous temporal and epistemic realities and the colonized landscape of western Canada. Drawing upon and subverting the trope of haunting in post-colonial studies, this article showcases the presence and resilience of Indigenous modes of being and ways of knowing. I forward that this Indigenous survivance is not separate from the colonized world or reliant upon an inaccessible pre-colonial past, but rather represents a lattice of resistance entangled within the present. Further, I argue that Monkey Beach provides an example of this survivance through sensitizing its readers to a pluralistic and relational epistemic imagination.

Trauma and the Loss of Self

In this paper, I introduce two ideas that lie at the intersection of trauma and philosophy: (1) a particular self-conception that is best visible in cases of severe abusive trauma that I call “taking oneself as someone at all” and (2) the kind of response required to help restore this loss, which I call “therapeutic recognition.” My hope is that describing these two ideas using various philosophical concepts and research found in authors as varied as Susan Brison, Thomas Nagel, Charles Mills, and psychiatrist Judith Herman, will require philosophy to face the reality of trauma and the lived experience of victims and survivors. I conclude that it is not the case that the trauma victim is “welcomed back” to the world she knew prior to her traumatic experiences; rather, it is the witness who joins the survivor’s world. In therapeutic recognition, both survivor and witness come to share a world and its underlying assumptions about how one’s physical safety and trust in others cannot be taken for granted. In this way, therapeutic recognition can restore the survivor’s ability to take herself as someone at all, among others, equally real.

Traumatologist Bessel van der Kolk states, “We now know that trauma compromises the brain area that communicates the physical, embodied feeling of being alive” (3). Although research into trauma primarily lies within the disciplines of psychoanalysis, psychology, neurobiology, and literary theory, the question of how trauma compromises the embodied feeling of being alive is fundamentally a philosophical inquiry. In trauma, what is at stake for us as humans is the aspect of embodiment that informs our sense of agency, ownership, and temporality. In the following, I survey the works of Maurice Merleau-Ponty, Shaun Gallagher, and Catharine Malabou and use the metaphor of the body as a work of art to describe what constitutes the embodied feeling of being alive, how it is compromised in traumatic experience, and how the destructive plasticity of trauma creates a new self.

“Physicians aren’t burning out; they are experiencing moral injury” (Talbot and Dean). That claim has struck a nerve among physicians. Moral injury occurs when people lose a sense of integrity—when what Buddhists call “right livelihood” is impossible, given the contradictions between their core values and identity and what they find themselves doing daily and in a system that ignores that lived experience. Moral injury results from traumatic ruptures between what people do and who they are. Physicians are re-naming as “moral injury” some manifestations of the dis-ease that has been called “burnout,” and medical students, residents, and medical educators are exploring ways to prevent it. This paper explores the various conceptualizations of the dis-ease being experienced by physicians today through the lenses of both Marx’s theory of alienation and through creative medical educators and students, who practice narrative medicine and point toward healing ways of acknowledging the suffering while living in creative tension with the potential dis-ease that faces those who, as Camus says in The Plague, “despite their personal afflictions…while unable to be saints but refusing to bow down to pestilences, strive their utmost to be healers” (287).

Content Warning: Please be advised that this piece discusses heavy, potentially triggering topics, including references to suicide and semi-graphic descriptions of bodily harm/physical pain and trauma.

This essay examines whether trauma has a nonexploitative place in marginalized comedy. Through the lens of Hannah Gabsby’s 2018 Netflix performance, Nanette, it analyzes two questions: (1) if marginalized trauma in the context of comedy extends the traditional framework for evaluating comedy and (2) if audiences are responsible for being “good consumers” of traumatic narratives from marginalized performers. Considering three analyses of Gadsby’s Nanette offered, respectively, by Rebecca Krefting, Peter Moskowitz, and Fury, this essay argues that a new framework for thinking about marginalized trauma in comedy ought to start with the responsibilities of the audience and suggests that we can begin to think about what this means by looking to Lorraine Code’s concept of “epistemic responsibility.”

Shame and Trauma Go to Class

To be a member of an oppressed social group is to face differential risk of trauma. Using Sandra Lee Bartky’s recognition of certain emotional states as “primordial disclosure,” I explore socially occasioned trauma, shame, and depression as gendered and racialized phenomena in higher education—a crucial site for exploring the processes that situate some bodyminds as normative, deserving, and competent, while others are situated as less able or deserving, or as intruders. Given systemic inequality, mental health can only be fully conceptualized and addressed, as Jameta Nicole Barlow says, “in relation to movements.” This article examines the salience of Disability Justice for addressing depression, shame, and trauma as matters of justice. The ethic of interdependence embodied in this movement challenges the radical isolation imposed by differential shame and provides avenues for individual and collective agency and social change.

The "Endangered Voices" of the Taiwanese Victims of Japanese Sexual Slavery

While the question of justice for the victims of sexual slavery institutionalized by the Japanese Imperial Army during the war has generated great communal and scholarly interest, in Taiwan it remains a pressing and unresolved concern what implications this traumatic history has had for the consolidation of the postcolonial and post-authoritarian publics. This is not only because the sexual enslavement of Taiwanese women unfolded before the backdrop of Japan’s colonization of Taiwan, in particular of the Indigenous “highlander” groups but also because the post-war public (and private) narrativization of this history, and any pursuit of justice, were impossible during Chiang Kai-shek’s authoritarian era. Referring to the victims by the Taiwanese term “Ama” (rather than the more common but problematic term “comfort women”), I propose that in contemporary Taiwan the traumatic history of female sexual enslavement is of great significance for contemporary public life because it functions as a kind of “optic,” which reveals and magnifies broader historical dynamics of colonial appropriation, of sexual and epistemic violence against women, and of the marginalization of Indigenous and economically disadvantaged groups. Methodologically, the identification of such an optic draws from cultural theory of psychoanalysis, which links traumatic experience to “unspeakability” and to psychic repression of overwhelming contents, and from sociological and philosophic insights into silencing as a mode of epistemic violence.

This article discusses how Frantz Fanon diagnoses the epistemic trauma that African people have experienced, resulting from Eurocentric epistemic violence, while prescribing the pursuit of new humanism as a coping mechanism. In the last five centuries, European modernity’s racialized ideals of humanity have mapped the world by excluding African people, disrupting their sense of humanism, and throwing them into existential downward spiral. In fact, Western modernity questioned whether African people are “humans”, and it concluded that they are not. This assumption has justified various interventions to deliver African people from objecthood. The consequences have been colonialism, enslavement, and apartheid, which have attempted to remove Africans from the realm of humanity. The epistemic trauma persists today as African people continue to search for new humanism. Fanon’s The Wretched of the Earth (1961) diagnoses epistemic trauma in African people while prescribing “decolonization” as an act that “triggers a . . . psycho-effective equilibrium” in the pursuit of new humanism and humanity. His Africana critical theory—envisioning philosophy in relation to humanities and social sciences as a means to social transformation—proposes new humanism and humanity founded on decolonization, thus moving beyond Eurocentric ideals of humanity.